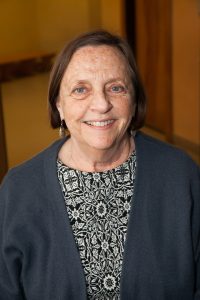 Andree participates in the annual WECAN conferences in Spring Valley, NY and has also attended several international conferences in Dornach, Switzerland. She has gained further professional development by attending conferences which focus on specific topics, such as puppetry and birth-to-three. She has attended Association of Waldorf Schools of North American (AWSNA) conferences as the delegate for HVS. She is a member of WECAN, the Anthroposophical Society, First Class, and Pedagogical Section. Andree is a core member of the Alkion Center since its inception and teaches in the two year Foundation Studies program and the annual Summer Intensive. She directs the courses in the Early Childhood Specialization of the Waldorf Teacher Training Program.

Eric G. Müller was born in Durban, South Africa, and double majored in literature and history at the University of Witwatersrand, Johannesburg. He attended Emerson College in Sussex, England, where he completed the Foundation Year, with emphasis on drama and creative writing. He studied Waldorf pedagogy at the Waldorf Institute in Witten-Annen, Germany, where he specialized in music education. Together with his family he moved to Oregon, where he became a class teacher at the Eugene Waldorf School, carrying a class through the eight year cycle. During this time he also taught German and music (orchestra, chorus, and individual classes).  He was a co-founder of the Eugene Waldorf Teacher Training Program.

Currently he teaches English and Drama at the Hawthorne Valley High School. The blocks he teaches include Eschenbach’s Parzival, Goethe’s Faust, Homer’s The Odyssey, History through Music, and Comedy and Tragedy. He is particularly interested in teaching electives on modern poetry, creative writing, and contemporary literature. For many years he directed the high school chorus.

He is a founding member of the Alkion Center and the director of the education department. He has taught at Simon’s Rock College of Bard as an adjunct chorus director, as well as summer courses at Sunbridge College. Over the years he has served as both faculty and college (council) chair, and sat on numerous committees, such as the Teacher Development Committee, which holds a special interest for him. He has written two novels, Rites of Rock (Adonis Press, 2005) and Meet Me at the Met (Plain View Press, 2010), as well as a collection of poetry, Coffee on the Piano for You (Adonis Press, 2008). His poetry, articles, and short stories have appeared in many journals, anthologies and magazines. www.ericgmuller.com

Lynne is a performing, pedagogical and therapeutic Eurythmist with over 20 years of experience.  She also has an extensive background in dance, choreography, physical education, yoga, early childhood education, and eldercare.  Lynne is a founding member of the Alkion Center and teaches in the Foundation Studies, Teacher Education, and Summer Courses, which recently included offering eurythmy to Waldorf Administrators in the Leading With Spirit program sponsored by the Alkion Center.

Martina is a graduate of the Rudolf Steiner Schule Bochum, Germany where she attended K-13. She studied art and English at Ruhr University Bochum and Emerson College in England, and holds a four-year full-time Waldorf Teaching Diploma from the Institute of Waldorf Pedagogy in Witten-Annen, Germany with a specialization in high school art teaching and art history. She moved to Eugene, Oregon with her family where she was artist-in-residence with the Lane County Council on the Arts, and was on the founding faculty of Waldorf Teacher Education Eugene. Since moving to the Hudson Valley, she has been teaching in the middle and high school at Hawthorne Valley Waldorf School for two decades, and at the Alkion Center for Adult Education since 2003. She is an internationally published children’s book illustrator, was founding member of Gallery 345 in Hudson, has exhibited her artwork in numerous venues throughout New York and Massachusetts including Sculpture Now at the Mount in Lenox, MA, Flying Horse Sculpture Show, Hamilton, MA, Diana Felber Gallery, LaMama LaGalleria NYC, Center Point Gallery, NYC and many more. She is the recipient of grants and prizes. She lives in Ghent, NY where she maintains her studio. To view her work and full resume please visit her website.

Patrick is an educator and practicing artist. In addition to university studies in his home state of Michigan, he studied and assistant taught sculpture at Emerson College from 1977-81. He has taught at the lower, middle, high school, and adult levels since 1978 in clay sculpture, wood and stone carving, drawing, history of art and architecture, philosophy, anthroposophy, and Waldorf pedagogy. His artwork has been exhibited, commissioned, or installed in New York, Massachusetts, California, Michigan, England, and Sweden. Patrick works out of his home-based “Calyx Studio” in Ghent, NY. Click here to view his work.

As well as teaching guest blocks and mentor teachers in other North American Waldorf schools, during his many years at Hawthorne Valley [22 as full time] he has taught main lessons in the high school, specialist art blocks across the grades, and engaged in various aspects of school governance and administration, including Faculty Chair, High School Chair, and Board of Trustees. Patrick is a founding and active core faculty member of the Alkion Center but has additionally taught adult courses in numerous Waldorf Teacher Education programs, most notably as a long time, adjunct instructor at both Antioch University, New England and the Center for Anthroposophy in Wilton, New Hampshire.